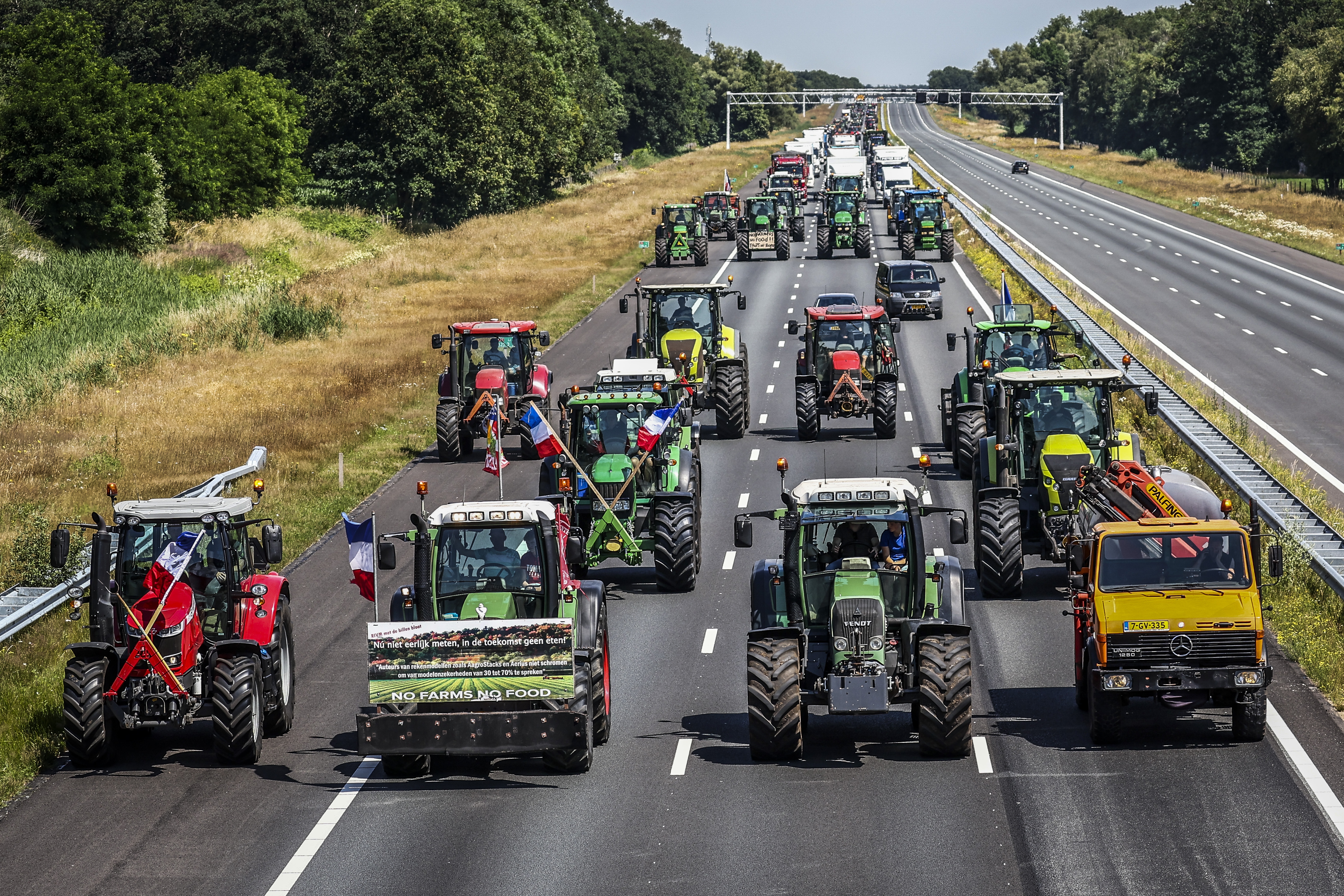 For those who are less than familiar with the intricacies of Dutch agriculture, the current wave of farmers’ protests (see DutchNews.nl: “Up to 40,000 farmers demonstrate against farm closures”, June 2022) will surely be puzzling. After all, Dutch farming is said to be among the most modernized sectors in the world and is presented, at least in hegemonic discourse, as an example for many other countries. At the same time Dutch farmers, especially the larger ones, who are now out on the streets, are probably among the most cosseted on the planet: receiving mind-boggling subsidies from the European Union’s Common Agricultural Policy.

The wave of protest is not an unexpected eruption. It builds, instead, on previous episodes that date back several years. It neither is a phenomenon limited to the Netherlands only. It resonates globally, since it regards the complex interfaces of climate crisis, farming, agricultural policies and farmers’ struggles.

The Dutch farmers that are currently protesting picture and perceive themselves as ‘warriors’, engaged in what they call ‘guerilla fights’: blocking the country’s highways with their heavy tractors and threatening to ‘up the ante’ in civic disruption to as yet undefined levels (which might include a total block on food provisioning of cities). At the same time right wing populist organizations and parties and influential parts of Dutch agribusiness are embracing and supporting these waves of protest.

This enigmatic situation can only be understood if two major contradictions are taken into account.

In the thirty years between 1960 and 1990, the style of peasant-like farming which was then dominant in the Netherlands was marginalised and entrepreneurial farming became dominant. This type of farming created farms that are strongly intertwined with, and highly dependent upon, agro-industries and banks, a change that was strongly supported by state-interventions and offered the promise of ongoing growth and almost unlimited expansion. However, in the following decades (the 1990s to now) the limits of this model became apparent. Entrepreneurial farming was increasingly running counter to the limits of both nature and society. The current nitrogen crisis (that underlies today’s protests) is but one expression of this contradiction.

Alongside this first contradiction, there is a second one that has come to the fore. The ideal type of agricultural enterprise promoted during the epoch of modernization (large-scale, specialized, highly intensive, a high usage of external inputs and fossil fuels; in short: industrialized farms) was promoted as the best (if not only) way to successfully compete within the world market. However, in practice such enterprises turned out to be highly vulnerable: price volatility easily translated into negative cashflows, with the high levels of indebtedness (a structural feature of this type of farming) being the Achilles heel. Thus, these high performing farms soon found themselves facing low or even negative incomes. But the decisions made over decades created path-dependency, making it very difficult to change trajectory.

The intersection of these two contradictions has proved to be a fertile breeding ground for frustration, bitterness, and a movement that is denying industrialized farming being at odds with nature and society. Instead, it is seeking to claim the ‘right’ to continue along the pathway that has been constructed, with vast public subsidies and technical support, over the last 50 years.

This movement is anti-democratic. It point blank denies the right of parliament to establish thresholds to limit the further expansion of industrialized farm enterprises (and thus limit, at least minimally, the associated pressures on climate, public health, landscape, biodiversity and the quality of rural life). It is a movement that opts for violence, just as it creates its own bubble within which its own partisan interests and views absolutely delegitimize any other approach. It puts the ‘other’ and ‘otherness’ centre stage when it comes to explaining the current problems. The ‘others’ (political parties, the press, consumers, etc., etc.) are to blame – the hegemonic way of farming and the farmers involved are innocent: more so, they are the victims. This radical farmers’ movement typically excels in turning things upside down. This clearly occurs, for instance, in the language that it uses. These farmers present themselves as ‘victims’ of unjust policies. As the ‘underdog’ in a heroic anti-state struggle. They even try to present themselves as ‘Jews’ persecuted by an authoritarian regime – a position that many people find an odious and disgusting comparison. There are remarkable turnabouts within their worldview as well. For decades they have favoured the exclusion of small peasant-like farmers based on the premise such exclusion was a precondition for ‘structural development’: one which favoured the entrepreneurs by allowing them the space to expand further.

Nowadays, though, such exclusion is presented as a major crime (as their own enterprises are at risk of expropriation). One thing, however, remains the same. That is the triple claim (or what they experience as a sort of threefold birth-right), to (1) continue with their way of farming, even if its rationale is highly contested; (2) to further expand their enterprises; and (3) if the first two prove impossible, to receive the maximum compensation. This ‘programme’ is clearly echoed in the results of negotiations so far.

The long-lasting, multi-facetted and complex interaction between evolving state policies and this movement of diehard agricultural entrepreneurs has made a strong imprint on both sides. The recent hesitancy of the state to draw a clear line has strengthened the winning mood of the diehards who increasingly perceive themselves as unbeatable. In a similar way, the generic character of agricultural policies (as opposed to differentiated and decentralized approaches) has produced frictions all along the line. These are also having negative consequences on the peasant-like segments of the Dutch agricultural sector which, ironically, are having to pay parts of the ‘bill’ left by the entrepreneurs. Thus, state policy is enlarging the ranks of its opponents (with the latter aptly using the image of weeping farm women from small farms – another turnabout!).

Yet, there remain large segments of peasant-like agriculture in the Netherlands. This type of farming is definitely different from entrepreneurial farming. It carries the germs of an important alternative that is well-aligned with nature and societal expectations. It has also developed new forms of multifunctionality that allow the farmers to escape the dilemma of grow or perish by providing services that are much in demand. Agroecological farms (that are part and parcel of this peasant-like segment) manage to combine high levels of sustainability while generating incomes that are higher than those obtained in industrialized farming.

The world has seen rural right wing movements before (especially in the 1930s), and they appear to be on the upsurge in many parts of the world again today. Understanding the dynamics and mechanisms that lead rural discontent to take one road or the other (i.e. gaining a privileged position within capitalist societies or contributing to their change) is an equally urgent task.

We also need to rethink and redefine the ‘agrarian question’. For the type of farming that is shaped by, and for, capital is destroying nature, significantly contributing to climate change,  and running against societal expectations. It should be rejected politically while peasant farming should be embraced as holding promise for the future. These conflicts definitely represent an interesting, and probably decisive, junction that will affect our landscapes and the way we eat for generations to come. In this respect the current events taking place in the Netherlands will surely have global resonance.